Back in January, Denzel Washington was honored at the 73rd Golden Globes with the Cecil B. DeMille Lifetime Achievement Award, an honorary Golden Globe given to filmmakers for their “outstanding contributions to the world of entertainment.” Before Washington gave his acceptance speech, his former co-star Tom Hanks presented a great montage of his movies. Watching this, I realized I hadn’t seen a lot of his work and that I should really remedy that. At the time of the award show, I had only seen Philadelphia (co-starring Hanks), Remember the Titans, and Flight. I also vaguely remember seeing Glory in a history class years ago. Regardless, four-ish films are still not enough to properly appreciate an actor as fine as Washington.

The Marathon Stars Blogathon was the perfect opportunity for me to delve into some of Denzel Washington’s films and to truly experience his talent. With February being the prime Oscar month, I decided to watch those films for which he was nominated for an Academy Award (excluding Flight as I had already seen it and remember it well enough). He’s one of the Academy’s favorite actors with two wins and six nominations, and so far he has the most Oscar wins and nominations of any non-white actor or actress in Academy history. In addition to his Oscar-nominated roles, I also watched one of his earliest films, which is also somehow the only film he’s been in that’s been nominated for Best Picture. So in chronological order, here’s what I watched from Washington’s vast filmography.

A Soldier’s Story was Denzel Washington’s second feature film, after making his debut three years earlier. Nominated for Best Picture, it’s based on the Off-Broadway play titled A Soldier’s Play, and a few of the play’s original cast members were cast in the motion picture, including young Washington. The film follows a black officer who is sent to investigate the murder of a black Army sergeant in Louisiana near the end of World War II. The officer begins interviewing the sergeant’s platoon, including Private Peterson (Denzel Washington). Washington is the ninth cast member billed on the film, so his role here is rather small, but it’s an important one to note as the film progresses. In the few scenes he had, he showed his potential as a great actor, and the character he played foreshadowed the kind of roles he would excel in the future. Though Washington wasn’t recognized for his work here, I do recommend checking this film out, and his character is an interesting one to watch.

With Cry Freedom, his fourth feature film, Denzel Washington earned his first Oscar nomination for Best Supporting Actor for portraying real-life activist Steve Biko. Set in the late 1970s, during the apartheid era of South Africa, the film follows real-life events involving black activist Steve Biko and journalist Donald Woods. Woods is initially wary of Biko as he finds his approach to justice destructive. But after meeting with the activist, he comes to understand his point of view, and a friendship soon develops between the two men. Washington is only in the first half of the film, but his character has a huge impact on Donald Woods, the film’s protagonist. Washington does an exceptional job of transforming himself into Biko, in which he also gave a convincing South African accent. This was his first role in which he portrayed a real person, and as you’ll see later in this post it wouldn’t be the last time.

Denzel Washington earned another Oscar nomination for Best Supporting Actor for Glory, which won him his first Academy Award. He plays another stand-out character in the form of Private Trip, an escaped slave who joins one of the first African-American military units of the Union Army during the Civil War. It remains one of Washington’s finest performances, which is especially remarkable considering this was still fairly early in his career. In the scene pictured, one of the film’s most powerful scenes, he doesn’t speak a word but he says so much through his eyes. Though he was in a supporting role in an ensemble film, Washington received second billing, showing that his star was on the rise and that it was only the beginning of his illustrious career.

Just a few years after winning his first Academy Award, Denzel Washington was back with his first nomination for Best Actor, his third Oscar nomination overall. From here on out, he played the lead role in the majority of his films. Portraying the famous African-American activist Malcolm X, Washington gives my favorite of his screen performances, and Malcolm X is also my favorite of the films I watched for this blogathon. The film’s running time can be a little daunting as it’s over three hours, but it’s constantly engaging as it chronicles the key events in Malcolm X’s life, including his criminal career, his incarceration, his conversion to Islam, and his activism. This all wouldn’t have worked so well if it weren’t for Washington’s compelling performance, which shows both the good and bad sides to the real-life figure. It’s one of the best biographical films I’ve seen, made even greater by Washington’s portrayal.

The Hurricane (1999), directed by Norman Jewison

The gap between Malcolm X and The Hurricane was the longest Denzel Washington went without an Oscar nomination up to this point (seven years), but during that time he made a dozen feature films. He couldn’t be ignored for long though, and he earned his second Oscar nomination in the Best Actor category, his fourth overall. Here he plays another real figure, Rubin “Hurricane” Carter, a former middleweight boxer who was convicted of a triple homicide. Unlike his previous biographical roles, the person Washington portrayed was alive at the time of filming, and the actor worked closely with Rubin Carter to prepare for the role. As I’ve found in watching his films, Washington elevates the film and gives another impressive performance, and it’s my second favorite of his from the films featured here.

Only two short years after The Hurricane, Denzel Washington came through with yet another Best Actor Oscar nomination for his work on Training Day and earned his second Academy Award. Over the course of a 24-hour period, the film follows two LAPD narcotics officers in the gang-ridden neighborhoods of South Central Los Angeles. Washington plays corrupt cop Detective Alonzo Harris, a departure from his usual good guy roles. His performance here as the film’s antagonist is so impactful that it even made it onto AFI’s 100 Years…100 Heroes & Villains list. Alonzo Harris isn’t a character you want to root for at all, but it’s fascinating to see how he navigates his way through tough situations. It’s Washington’s most memorable performance, and it’s the movie he’s most known for according to his IMDb page. I’m glad he finally won an Oscar for Best Actor and that he earned it for a deserving performance.

Check out his Oscar acceptance speech here, which includes some great reaction shots from Sidney Poitier. For some context, Poitier had received an Honorary Oscar the same night, and Halle Berry won Best Actress just before Washington won Best Actor, becoming the first person of color to win the award; it was a truly historic night.

As I mentioned earlier, Denzel Washington received another Oscar nomination a few years ago for the 2012 film Flight, more than ten years after his second Oscar win. He’s still working steadily in lead roles, and this year he’ll be appearing in The Magnificent Seven, a remake of the ’60s western directed by Antoine Fuqua, who directed Washington in Training Day.

Looking at just the films he was recognized for at the Oscars, Denzel Washington has shown quite some range over nearly three decades, and it was great to see him grow from a supporting player to a leading man. He’s easily one of the most charismatic actors to grace the silver screen, and certainly one of cinema’s most handsome. I’m so glad I finally got around to watching more of Washington’s work, and I look forward to seeing many more of his films.

I wrote this entry as a part of The Marathon Stars Blogathon, where bloggers are writing about the actors and actresses they’ve discovered recently. Click the banner below to read more posts! 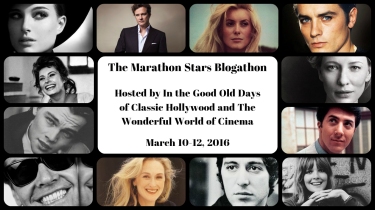