It was on this day 80 years ago that one of Hollywood’s brightest stars was born, Natalie Wood. She’s an actress who holds a special place in my heart, as she was one of the first stars I fell in love with when getting into classic Hollywood movies. In honor of her birthday, I wanted to look back at the three Oscar-nominated performances: Rebel Without a Cause, Splendor in the Grass, and Love with the Proper Stranger.

REBEL WITHOUT A CAUSE (1955)
Directed by Nicholas Ray

Jim Stark (James Dean) is the new kid in town, trying to stray from his troublemaking ways of the past that caused his family to move in the first place. He forms a bond with classmate Plato (Sal Mineo) and falls for Judy (Natalie Wood), the girlfriend of one of the tough guys at school. Jim doesn’t escape trouble for long, as he’s soon confronted by the young toughs to partake in a dangerous game, resulting in serious consequences for all involved.

Natalie Wood’s role in Rebel Without a Cause came nine years after her film debut in 1946’s Tomorrow Is Forever. Up until this point, she was seen as just a child star, so director Nicholas Ray initially didn’t think she fit the role of her wild teenage character. But one night while out with friends, Wood got into a car accident, and when Ray rushed to the hospital, he and Wood overheard a doctor call her a “goddamn juvenile delinquent”. After that, Ray cast her in the role of Judy, which helped showcase her acting range beyond the childlike sweetness she displayed in her previous roles. For her work in the film, Wood earned her first Oscar nomination, which was also her only one in the Best Supporting Actress category. She ended up losing to an actress in another film starring her co-star James Dean: Jo Van Fleet for East of Eden. Though she lost the Academy Award that year, Wood did win a Golden Globe for her performance as Most Promising Newcomer (Female).

SPLENDOR IN THE GRASS (1961)
Directed by Elia Kazan

High school sweethearts Deanie (Natalie Wood) and Bud (Warren Beatty) are in love with each other, but society’s expectations of sex before marriage cause problems in their relationship. While Bud has urges to act on his feelings for Deanie, he doesn’t want her to end up with a bad reputation like his own sister. Deanie’s mother and Bud’s father also cause rifts in their relationship, eventually driving Bud away from Deanie, and driving her into madness. 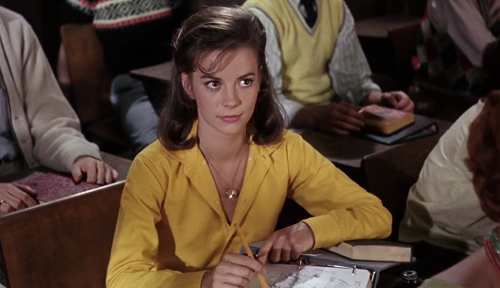 The year 1961 ended up being a big one for Natalie Wood’s career, as she starred in West Side Story, which ended up winning multiple Oscars (including Best Picture), and Splendor in the Grass, which earned the star her first Academy Award nomination in the Best Actress category. Director Elia Kazan cast Wood in the role of Deanie because he felt she had the chops to portray a more mature character than she had before in her career. Her work in this film also was also a major turning point for her, as it helped put her career back on track after a series of bad films. Her emotional performance in this film is arguably her most well-regarded, and it earned her the most accolades out of all the roles in her career, including Golden Globe and BAFTA nominations for Best Actress. Come Oscar time, she ended up losing the award to Sophia Loren for Two Women, who ended up becoming the first actor to win an Academy Award for a performance in a foreign language film.

LOVE WITH THE PROPER STRANGER (1963)
Directed by Robert Mulligan

New York City salesclerk Angie Rossini (Natalie Wood) discovers she’s pregnant after a one-night stand with jazz musician Rocky Papasano (Steve McQueen). She tracks him down, hoping he’ll pay for her abortion. Though he doesn’t remember her at first, Rocky agrees to help her out. The two soon get to know each other better leading up to the procedure and develop deeper feelings for one another.

Two years after Splendor in the Grass, Natalie Wood earned her last Oscar nomination for her performance in Love with the Proper Stranger. It also made Wood the second actress to net three Oscar nominations by age 25, following Teresa Wright. The role of Angie was Wood’s most mature role to date, fully displaying how much her acting talent had grown since she started her career at just 8 years old. Though she again lost the Oscar, this time to Patricia Neal for Hud, Wood said working on this film was “the most rewarding experience I had in all films, all the way around.”

The three films for which Natalie Wood earned Oscar nominations just scratch the surface of the talent the actress displayed throughout her career. From her work as a child star in films like The Ghost and Mrs. Muir and Miracle on 34th Street, her teenage roles in films like The Searchers, to her more grown-up performances in films like Gypsy and Inside Daisy Clover, Wood showed a wide range of acting chops, and no matter the quality of the film itself, she always turned out a compelling performance on screen.

I wrote this entry as a part of The Natalie Wood Blogathon, where bloggers are writing about the legendary actress in honor of her birthday. Click the banner below to read more great posts! 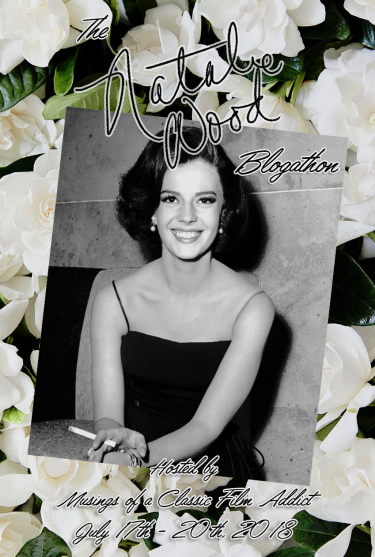