Melodramas are a tricky genre to invest in, as it’s often filled with ridiculous conventions to heighten emotions between characters. Douglas Sirk was one director who excelled in melodramas, infusing the genre’s absurdities with a more artistic approach. With All That Heaven Allows, he created a profound film that one could easily immerse themselves in, which studies the struggle between one’s happiness and society’s expectations. And at the center of the drama is the handsome Rock Hudson portraying Ron Kirby, one of my ultimate cinematic crushes. Seeing him alongside Jane Wyman against some gorgeous autumn and winter scenery (filmed in luscious Technicolor!), it’d be difficult not to conjure up romantic feelings while watching this movie. 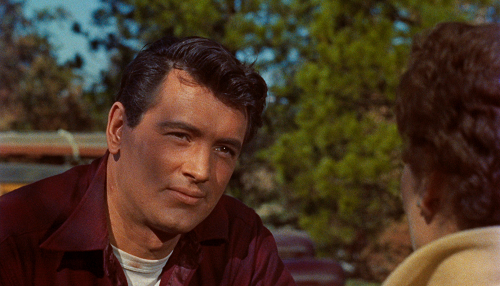 All That Heaven Allows follows a romance between wealthy widow Cary Scott (Jane Wyman) and her easygoing gardener Ron Kirby (Rock Hudson). Soon their small town is gossiping about their relationship with disdain, and her two college-age children are embarrassed by their mother’s decision to pursue a relationship with a younger man. Ron doesn’t care what society thinks about them, but it’s harder for Cary to ignore what’s being said, so she must choose whether she wants to live by others’ approval or follow her own happiness.

Although I had seen Rock Hudson in three other movies prior to this one (Written on the Wind, Giant, and Pillow Talk), and loved him in each of them, it wasn’t until I saw All That Heaven Allows that I was truly affected by his screen presence. As Ron Kirby, he’s practically my ideal man, the only kind you’d find in the movies as he’s just too perfect to be a real person. When we meet him in the film’s first scene, he’s tending to some trees on Cary’s front yard, but stops what he’s doing to carry a big box of dishes for her. A moment later, Cary offers him coffee and lunch, and he pulls out her chair for her before sitting down (you can watch the whole scene here). He’s a perfect gentleman throughout the film, and loves Cary so simply and yet so deeply. Even when Cary thinks of ending their relationship, he helps her put on her boots before she faces the snow outside, despite being upset with her decision (you can watch the scene here, which also features some of the film’s most exquisite shots).

Aside from being an obviously handsome man, Cary is attracted to Ron because he looks past her age and social status and treats her as her own person, which is something she’s not often accustomed to when socializing at the country club. Everyone around her seems to make a point of her age, including her own children, while Ron doesn’t take any notice of it (in reality, Jane Wyman were only eight years older than Rock Hudson). While many of the townspeople assume Ron is with Cary for her money, he truthfully doesn’t care much for material things, and prefers to lead a simple life on the land growing his trees. Of course, he’d love to share this life with Cary, and even refurnishes a cozy, old mill for them to live in, as she has no need to stay in her large, desolate house. Being with Ron fills the empty void in Cary’s life, and he gives her the unconditional attention she’s been missing.

This film was the fourth one Rock Hudson made with director Douglas Sirk, and they eventually went on to make nine films together. And it’s thanks to Sirk that Hudson became a major heartthrob and matinee idol during the 1950s and 1960s. For the 1954 film Magnificent Obsession, Sirk cast Hudson in his first leading role, opposite Jane Wyman. After the success of that film, the three teamed up the following year for All That Heaven Allows. It’s in this movie that I think Hudson reaches his peak as a romantic leading man, at least as far as his dramas are concerned. His romantic comedies are in their own league, especially the ones he did with Doris Day, but Ron Kirby remains my favorite of all the characters I’ve seen him play.

I probably wouldn’t love Ron Kirby as a character so much if Rock Hudson wasn’t playing him, and he’s a big reason why I’m so drawn to the character, the relationship between him and Cary, and the movie as a whole. He and Jane Wyman proved to have excellent chemistry in their previous film, Magnificent Obsession, but here you can really feel the passion between them, and they’re just sizzling on screen whenever they’re together. Hudson perfectly embodies this role, playing the romantic “tall, dark, and handsome” type that audiences often swooned over. And just like Cary, we can’t resist Ron’s charms, and it’s hard not to fall in love with him. I don’t know if there’s such a thing as a “perfect man”, but Ron Kirby comes very close to it. 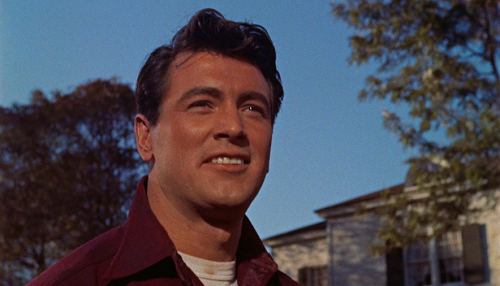 I wrote this as a part of the Reel Infatuation Blogathon, where bloggers are writing about their character crushes. Click the banner below to read more fantastic posts!